Given the tumultuous and tawdry events of the past year there have been spectacular winners (and how…!!!) and dramatic losers and in that latter category must go migrants and the whole issue of migration – possibly the most toxic topic in current politics. Thus it is timely and encouraging that such a reputable body as the McKinsey Global Institute (MGI) should take a forensic look at the subject in their report ‘Global Migration’s Impact and Opportunity’ (mgi-people-on-the-move-executive-summary-december-2016-2) and, lo and behold, came to the conclusion that migration generates significant economic benefits. Despite what people and the media might think more than 90% of the 247 million people who live outside the country they were born in, moved voluntarily, usually for economic reasons.Of these 35% are highly skilled migrants with tertiary education or above.

The McKinsey Report showed that workers moving to higher productivity locations boosted global GDP. The report also showed that migrants contributed roughly $6.7 trillion, or 9.4%, to global GDP in 2015 – some $3 trillion more than they would have produced in their origin countries. North America captured up to $2.5 trillion of this output while up to $2.3 trillion went to Western Europe. Migrants of all skill levels made a positive economic contribution whether through innovation, entrepreneurship or freeing up natives for higher value work. In fact, the report shows that migrants do not harm the long term employment or wages of native workers.

However, despite all this and other reports showing how migrants are the great starters of companies, migration gets a bad press and is viewed negatively. Ironically, Diasporas, which are caused by migration are viewed more positively. Whereas migration is seen as a centrifugal force dispersing people around the world, Diasporas are seen as a positive convergent force connecting people back to their countries of origin, heritage or affinity. Just one example of this is remittances which now top over $600 billion annually.

This report is well worth a read this holiday season and helps put a very emotive topic in some perspective. 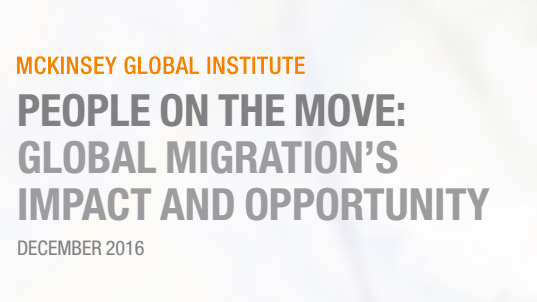