Networks are the key to success, The International Friend of Georgia award 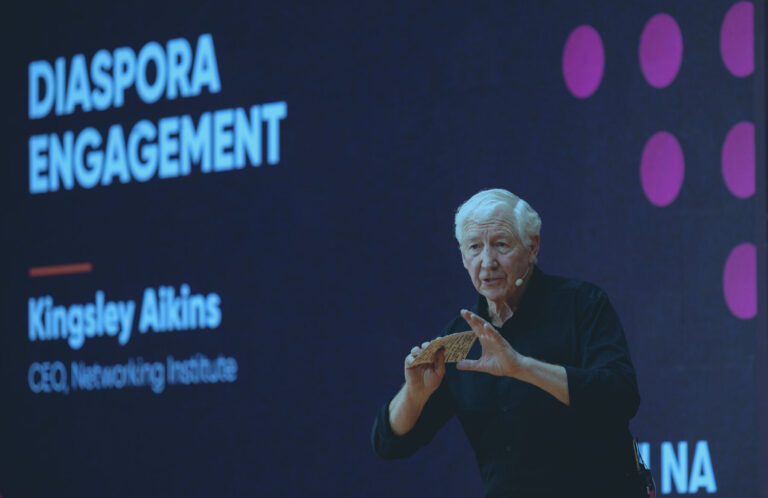 Networks are the key to success. I have lived in six countries throughout my career and worked for an organisation active in the Irish diaspora,  and I came to appreciate one key fact: success was all about building networks. They were the glue that made everything happen. Whether it was the Lansdowne Club in Sydney or The Ireland Funds in the US and ten other countries, they all had one thing in common: the desire to belong to a network. They all tended to work in mysterious ways and had momentum of their own, but the common effect was that what were once “lost actors” could now become “national assets”.

Technology and communications changed everything. In the old days, your geography dictated your identity. If you lived in Southern California, that’s who you were. Now, however, you can live in Southern California and be very committed there, but also be very engaged with your country of origin, heritage, or affinity. You can live a “hyphenated life” as American-Irish, Australian-Greek, or Canadian-Lebanese. Now, we can truly say that “geography is history”.

The exciting thing about this is that so many places are now appreciating the potential this represents, which is why we developed the concept of “diaspora capital”. We define this as the overseas resources available to a country, region, city, place, or organisation, and it is made up of three flows: flows of people, flows of knowledge, and flows of money. What was once the preserve of just a few countries is now of intense interest to many. In 1990, just over 150 million people lived outside the country they were born in; now, that figure is over 280 million.

Ireland has always been a global leader in diaspora engagement, and it is enshrined in our Constitution. President Michael D. Higgins recently stated, “Our diaspora is one of Ireland’s greatest resources: through the contribution our people make to the nations they migrate to; through the bonds they forge with the peoples of those countries, our migrants have allowed Ireland to have global connections far beyond our size.”

One manifestation of this relevant to other countries is now part of Ireland’s Diaspora Strategy 2020-2025. That is the statement that “Building on Ireland’s experience in engaging with its diaspora, Ireland will seek to deepen its understanding of diasporic community engagement and seek to share our experiences with other countries with large diaspora communities.” Part of this initiative is to “Promote Ireland as a hub of expertise for Diaspora Engagement.”

Having worked with over 30 countries around the world with my esteemed colleague, Martin Russell, it was great to spend a few post-Christmas days in both Serbia and Georgia. In Serbia, I had the opportunity to address a parliamentary committee on Diaspora Engagement and share Ireland’s story with them, as well as with Prime Minister Ana Brnabic. I also had the chance to give a presentation on Networking to a group put together by Ivan Brkljac and Aleksandra Bozic in a Science and Technology park in Belgrade.

Then, on to Georgia, and many thanks to their Minister of Foreign Affairs, Ilia Darchiashvili, for presenting me with their International Friend of Georgia Award at a spectacular ceremony in Tbilisi. It is wonderful to see first-hand how these countries look to Ireland as a leader in this area and great that we have something to offer to so many other countries in the world. It truly is an example of Ireland’s ‘soft power’ and underscores what an opportunity is hidden in plain sight for Ireland to play a very valuable global role. Belonging is such a powerful dynamic. The key now is to build on this momentum and position Ireland as a world leader in this burgeoning sector. Carpe Diem.

© The Networking Institute 2023 – All Rights Reserved. Developed and maintained by Craft Digital